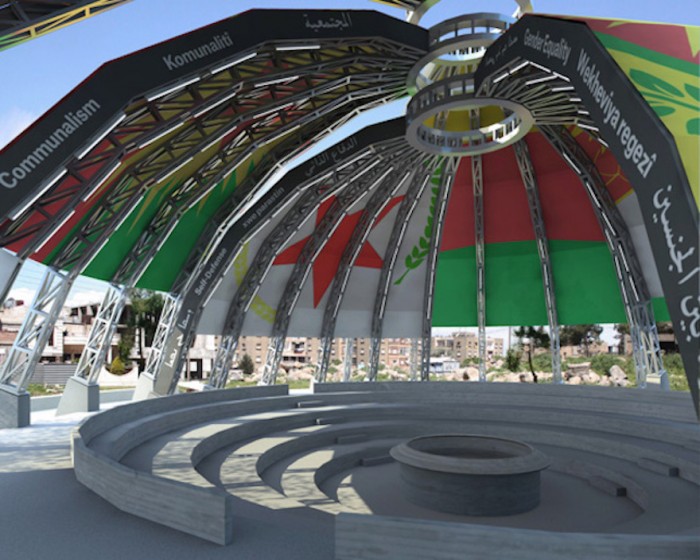 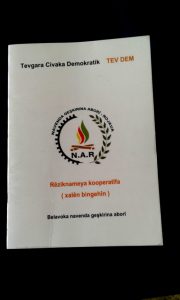 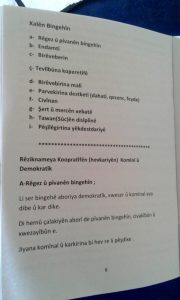 Official documents of the North Syrian Federation Economic Committee with principles and bylaws of the economic revolution based on cooperative economy.

“We want 80% of our economy to be made up of co-operatives, but we don’t believe in a socialist model that prohibits private initiative. Our idea is that each person plays an active role in society, and the transformation has to happen step by step, with the participation of the people”

Heval Rashid, co-president of the Department of Economy

(source: Co-operatives and Communes: The Third Way of Rojava in the Syrian Conflict)

THE CO-OPERATIVE CONTRACT OF THE DEMOCRATIC FEDERATION OF NORTHERN SYRIA

A – Definition and Principles

The co-operative is a social organisation that does not seek profit, but the fulfilment of the basic needs of society, based on collective work, sharing, solidarity and self-governance.

The co-operatives are basic moral-political pillars of the restructuring of society on a democratic foundation.

The co-operatives do not limit themselves to economic production. In both their economic activities and support in other social fields, they are determining factors of democratic society.

The co-operatives follow the basic principles and approaches of the democratic-communal economy paradigm as their basis.

The satisfaction of basic social needs and ecological compatibility are taken as the underlying principles of all co-operative activity.

Co-operatives embrace the economic experiences of the last two centuries of democratic-social resistance, and the goals of free individual – democratic society. The aspects of these experiences that contribute to the moral and political development of society are taken as a basis.

The decisions regarding the internal workings of the commune are taken and put into practice with the participation of every member of the co-operative.

While every unit within the co-operative takes decisions autonomously, decisions that also relate to the other units and the co-operative as a whole are made jointly. In situations involving the larger community, the formulation of policy and its implementation is carried out by all of the communities involved.

All means of production, livestock and fields used in co-operative activity are at the disposal of the commune, and are to be used for the satisfaction of common needs and joint economic production.

1 – The legitimacy of the co-operative is grounded in the presence of moral and political restructuring of society and its economic field.

4 – The co-operatives are voluntary organisations that are open to all those who accept the responsibilities of membership and are able to make use of their benefits, without sexual, social, racial, political or religious discrimination.

5 – The co-operatives are democratic organisations regulated by their members. The elected coordinators are responsible towards members.

6 – All members have an equal vote. If a member is also a member of another co-operative, they can only become a coordinator in one of them. The co-operatives are based on the principle of self-governance.

7 – Anyone can participate who espouses the communal economy and sees in themselves the conviction, will, determination and power to act for its realisation. Every person who accepts the paradigm, principles and measures of the democratic-communal co-operative, and makes an effort to realise it, can become a member.

8 – The co-operatives are autonomous, self-reliant and self-governing organisations. In the event that the co-operatives enter into an agreement with other institutions, including governments, or increase their budget through external sources, they carry these out in such a way that the democratic government by the members and autonomy of the co-operative are preserved.

9 – The co-operatives provide educational opportunities for their elected representatives, coordinators and workers, to actively contribute to the development of the co-operative. In this framework, the co-operatives are responsible for providing and supporting activities to encourage vocational, social, cultural, and athletic education.

10 – The co-operatives can form associations on the basis of their activity and area of production, and on regional, national and international scales. However, these associations are not to seek economic monopoly or hegemony, but to satisfy the needs of the community.

11 – The co-operatives work for the sustainable development of their communities through consensus-based policies. The democratic-communal co-operatives are the economic models of the democratic reconstruction of society. They operate not just for their members, but for the sustainable and holistic development of the whole society and the commune and associations they are part of. In areas such as health, infrastructure and services, transportation, communications, and ecology, they carry out activities to the extent that their means allow and offer support for the existing ones.

Co-operative associations are responsible for tasks such as regulation of member co-operatives, conformity of the programme with co-operative principles, forming bonds with the canton co-operatives and collecting membership fees.

The co-operatives can form multiple workshops and facilities.

The board of management is composed of democratically elected members. Only one person per family is allowed to be a member at any given point.

The General Assembly can make changes according to the general needs of the co-operative in terms of the creation of the board of management, their functions, period in office and labour process. It can call the elected members to account, recall them before their term is over, or change their position.

The Co-operative Board of Management is chosen, given tasks and regulated by the General Assembly, and re-elects the board in annual meetings.

In the co-operative management boards, there is a principle of using the system of co-chairs.

The Board of Management is responsible for carrying out the decisions of the General Assembly. It cannot make and implement decisions beyond the parameters defined for it.

In extenuating circumstances, such decisions can be taken with prior approval from the General Assembly.

The Board of Management reports on its activities to the General Assembly every six months.

The activities and procedure of the co-operative, and their compliance with the principles and rules set out by the General Assembly, are regulated by the House of Co-operatives. They issue proposals for investigation into practices that violate the paradigm, principles and rules. Recommendations are made to help correct observed insufficiencies and errors. The House of Co-operatives feeds back to the General Assembly every six months.

The co-operatives have a collective work model. All members that are fit to work take part in at least one enterprise based on the rules and measures.

Families are granted the opportunity of private production insofar as this does not interfere with collective work.

The working day and hours of operation are organised based on the balance between the satisfaction of the economic needs of society and social transformation.

Vocational training across all subjects relevant to the co-operative are carried out in order to establish self-sufficiency. The General Assembly is authorised to regulate the division of labour and work shifts.

The co-operatives actively struggle against sexism in all of their activities. More active participation for women is facilitated through a division of labour that aims to transcend the sexist roles allotted to women and develop women’s agency. In the activities of the co-operative, the Women’s Law is the reference point for all issues concerning women.

In the co-operative system, markets based on monopolising profit, speculation and inequality are not allowed.

The markets are built by the communities and the co-operative. Aside from this, no regions or communities can take or enact unilateral decisions that concern other regions and communities when creating their markets.

The market is built cooperatively between the people and regions concerned. In the construction of a market, mentalities of excessive localisation, centralisation and universalism that are out of touch with the local area are not given space.

Different co-operatives, settlements, regions or cantons can create markets jointly. Collective production, distribution and enjoyment are essential to the co-operative. A part of the produce of the co-operative is distributed to the members in order to satisfy the needs of the commune members, and the remainder is put on co-operative or local, regional, inter-communal and international markets.

HOW DO CO-OPERATIVES WORK IN ROJAVA?

This is an official booklet produced by the Social Economy Development Centre, which is a part of the TEV DEM [Movement for a Democratic Society]. It lays out the basic principles under which co-operatives in Rojava run, based on decisions made after many meetings, which were attended by all of Rojava’s economic committees.

This translation of the book is taken from an Arabic version, while the pictured is the Kurdish language version. The translation has been verified by friends in Rojava, who confirm that this is the current and complete version at the time of publishing this article. The Kurdish name for the book is “Rêziknameya kooperatîfa, xalên bingehîn”, which roughly translates as “Co-operative guidelines (basic principles)”.

[Edit: very small amendments made to terminology 03/01/17 to more accurately reflect the translation]

All the co-operative’s members are members of the General Assembly.

The follow-up process is generally done by the co-operative commissions and meetings. If needed, a special follow-up commission is formed by the General Assembly consisting of at least three people. Members are not entitled to be members of other commissions such as the Financial or Administrative. It submits a report about its work to the General Assembly and to the Administrative Commission.

This coordination takes place with the participation of members from the Administrative, Financial and Follow-Up commissions and three other members from the co-operative. The mission of this coordination is to develop the co-operation between the commissions and the management. It holds a meeting once a month; evaluating the commissions’ reports during their meeting and taking the necessary decisions. After each meeting, a comprehensive report about their monthly business is prepared and submitted to the General Assembly Meeting which is held every three months.

(Foundations and standards of financial business)

All expenses must be recorded in systematic accounts. Two members of the Financial Commission and one member of the management should approve the accounts.

In addition, all the imports and sales must be recorded in receipts and bills. (These bills are not less important than the previous bills)

It is necessary that working hours are recorded, the start times for all workers and hourly workers need to record all hours worked in the book. The work carried by the worker should be documented so the worker knows what job they carried out and receives their payment at the end of the month for that work.

Which means the proportion for the co-operative must reach a level of 10% within five years, and in the year in which the capital increases the rate slightly, this number is added to the joint fund to boost the co-operative.

Evaluating mistakes and accounting errors in accordance with the terms and standards of the Democratic Society Movement and the Court of social justice.

(Errors and faults of second class):

Based on these criteria and self-democracy decisions exclusive financial power is prevented.